APOLOGIES FOR THE LACK OF ACTIVITY 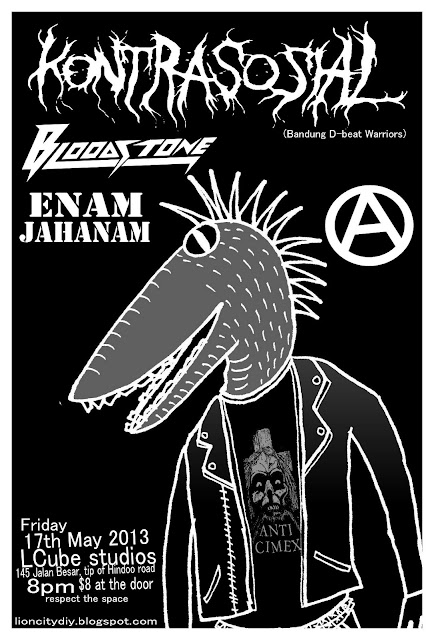 KONTRASOCIAL are back to play here again, its their 3rd time here and they never fail to give us pure d-beat hammering.


Posted by LIONCITYDIY at 7:08 AM No comments: 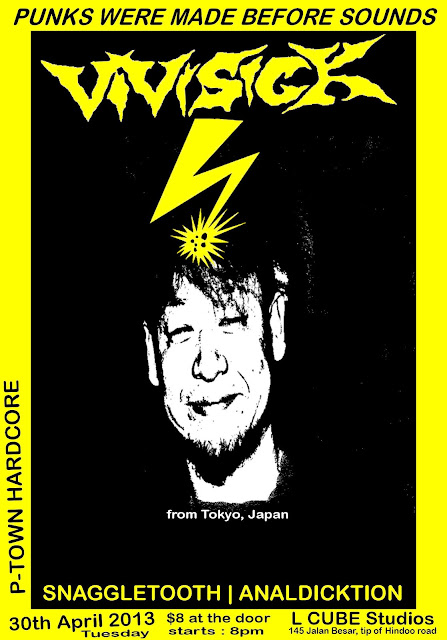 You've probably seen them back in 2005, now they are back.

Posted by LIONCITYDIY at 11:20 AM No comments: 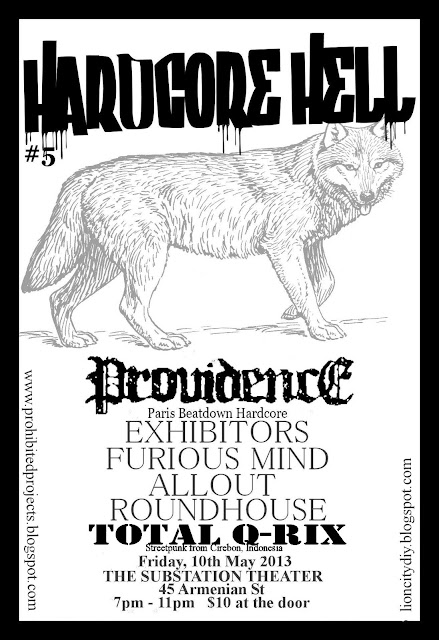 Posted by LIONCITYDIY at 11:13 AM No comments: 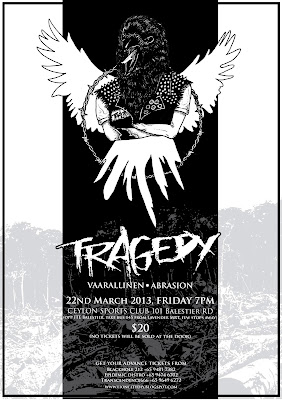 Ever since I have received words that dark crust overloads, Tragedy are going to hit Singapore shores sometime in March, I was fucking overridden with joy. I meanTragedy, the band that put out classics such as Vengeance and Nerve Damage,is playingin Singapore? Embarking on their South East Asia tour with Singapore being the third date, they were about to set a new milestone and a high point in the local punk scene. They might be the biggest to ever step foot and to grace the ears of the underground this year. The date was marked very well in advance, calendars were slowly being filled up, and days of anxiety before the gig was ever-consuming for us all.
Fast-forward to that day, it was a cloudy Friday evening; the sun has been laid to rest and the night is slowly taking over. I was first greeted by a sign adorned in true Black and White fashion, and by following it, the eagle will then lead me the way to Ceylon Sports Club, the punk-claimed territory for that few hours of musical chaos. The trinity of Abrasion, Vaarallinen and Tragedy are set to destroy tonight; tonight, the stage will be fuelled with relentless hatred and aggression.
I continued following the sign, and the sighting of colourful mohawks, patched vests further validates my doubts. I realise I was among the earliest to arrive, so I checked my phone and it clearly reads, 6.30pm. Thus, I had the chance to check out the venue before the show started. The building was embellished with a number of high ceiling fans, something which I was eternally grateful for, well at least for that day for they were going to be proven very useful. It was really just a small place yet it possesses a homely feel which I could relate to instantly.
With Abrasion doing their sound check at the background, I paced around the room for a while, with eyes darting hastily around every corners of the room, observing and absorbing the many details of settling in. Overall, the venue was pretty neat, and that coming from someone who was not really asking for much. I then proceeded to the merchandise tables, and begin looking through the wide variety of zines, tapes and cds, focusing hard, like a kid choosing his first toy. They were laid out as clusters amongst themselves, and I managed to spot some rarities in between here and there. However, being a poor ass dude as I am, I could only bring home the loot that was mostly tagged with the name of Tragedy. 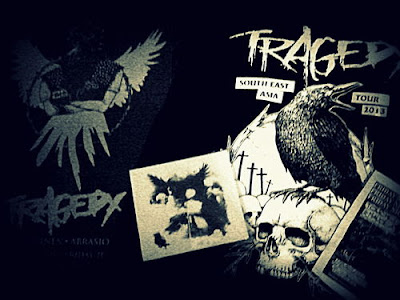 Determined to get some fresh air, I stepped outside only to be swept over by the rising crescendo of cigarette smokes. Well, this is definitely no place for a non-smoker, but alcohol, damn I’m all in for it. And as the local punks light up sticks one after another and the drinks were passed around with humble graciousness, I couldn’t resist smiling to myself. At this time, there was now a big gathering of attendees all marked with prideful colour of black. In this sea of commotions, the people were all immensely drowned in their interesting conversations, of which the air was filled with the joy of youthful laughter. Handshakes were literally flying everywhere, contributing to a lively scene of friendliness with an authentic, punk passion.
“First band, Abrasion!” and that came right out of the blue. It was the throaty announcement of the first band that was going to play and it finally came through. As the rush of excitement follows, people soon transformed into a flock of hungry wolves, and to begin occupying the small, crammed room. Seemly no strangers to the local scene, Abrasion was readily showered with overwhelming supports.Abrasion, a 2 piece battle machine that regurgitates hard, mind-grinding riffs and an insane array of blastbeats, all engulfed within a wall of heavy distortion. Wasting no time, and leaving no heads intact, Abrasion opens the well to the energies that was about to unleash that very night. There was no room for breaks or pauses, and at one point, it begins to feel like I’m listening to just atonal noise. With that, Abrasiondefinitely lives up to their eponymous name with their brand of straight-up brutality. Validating the fact that numbers could do just less, the army of two tears and shreds every foundations and barriers to dust, and in return receiving teeth-gritting acknowledgement from the crowd themselves. With grindcore as their weapon of choice, it was the perfect medium for their inaudible onslaught, giving rise to decibels of relentless chaos and the inducing of intense headaches. Their set then collapses down to seemly, unending sweeps after sweeps of feedbacks. This my friends, is aural embodied violence!
Continuing on the path of destruction were local d-beat veterans, Vaarallinen that kills with a unique flavour that is drenched in heavy reverb, and not forgetting their Finnish tongues. Often seen as a crowd favourite, Vaarallinen are masters of the 1-minutes, pumping out fast, catchy grooves right after another. It will soon occur to spark some friendly activities in the pits, and amidst all that fist-throwings and whatnot, the crowd brings the atmosphere to a higher level of intimacy by shouting out the words that are housed in most of Vaarallinen’s punk anthems. People were now going fucking nuts, raging but all truly satisfied in getting their fix. Ending off with an impact, Vaarallinen commands the people to hype up for the last few songs, adding onto the craziness that was now out of control. With the closure of the set come weary necks but above all, a great number of tired legs and arms.Vaarallinen’s place at the top of the league is definitely irreplaceable.
Finally, it was almost coming to the highlight of the night and the arrival of the eagles was now imminent. As the heroes take central stage, the room was now bustling with life and vitality, with many eagerly waiting for the strike of the first chord. As Tragedy greets the crowd with an unpromising conviction, the welcoming punks cheers on with monstrous screams to return the favour. The room was now in a constant state of anarchy, heavy boots were ever roaming the grounds and the number of crowd-surfing was just uncountable. Basically the crowd were separated into two sections, ones that are in awe and the others who are just thrashing the hell out. But there was one thing in common, and that everyone was having a great time. However, Tragedy is definitely not fond of keeping things at a balance, but instead tries to keep them wrecked and moving with towering intensity. “Do you feel it? Do you feel the hunger?” shouted the pissed-off Todd, which was now sending goosebumps all over my body, which was now made worse with the barrage of dark melodies. It was now getting fucking humid, and the perspirations that were being garnered could easily fill an entire water tank. But the universal response was that they couldn’t care less, and I was keeping things running as if with my last ounce of energy. It was overwhelming, and I could totally imagine seeing the actions from a third-person perspective, and I’d be like “Wow! What a mess!” After what seem like hours, it was now nearing the end of Tragedy’s set. However, the people were hungry for more, encores after encores, Tragedy was more than just an addiction. Along the way, even my personal favourites were being chanted out, namely the crushing Eyes of Madness and Crucifier. The people were now patiently awaiting the return of the heroes, but all was done, and the eagle had taken its flight. Although my ears were disappointed from not listening to my favourite treats, it was a fact that Tragedy has played in its full glory. And I could only look for the words in my head, and they came out to be, “What a night!”


Posted by LIONCITYDIY at 7:38 PM No comments:

Thanks to everyone who attended the TRAGEDY show last Friday. It was insane,awesome and no other words can describe what a night it has been. For those who missed it, that was probably the best show of the year.

check out photos and videos from the show! 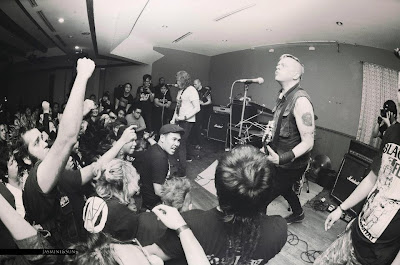 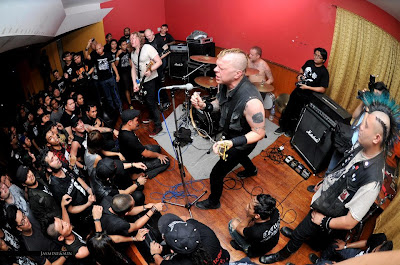 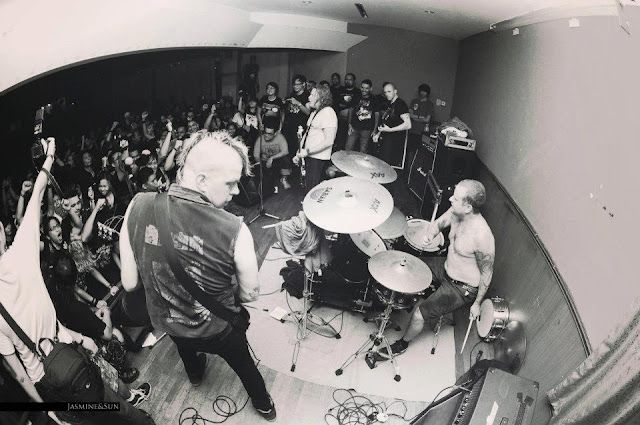 Posted by LIONCITYDIY at 11:19 PM No comments: